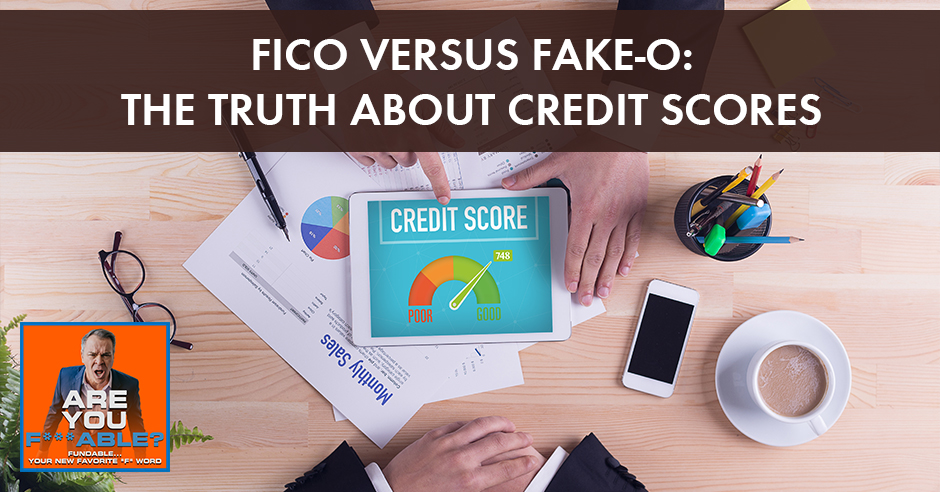 We take one of the greatest mysteries about credit scores that keep you back from being fundable. In this episode, Merrill Chandler shows how lenders and FICO dangle the idea of a credit score in front of us so they can distract us from what they’re measuring. Discover the truth about FICO and these so-called Fake-O scores, and find how you can play and win the fundability game.

First of all, all credit scores are created equal. There is not a chance. First, there are FICO scores. We’re all familiar with FICO? We think that there’s a FICO score. You may be getting a score from your bank or your credit card issuer that says, “Your FICO score is 723.” Until you get through these episodes, you don’t even know what’s being foisted upon you, what they’re trying to tell you because even FICO has a Fake-O score. After FICO scores, there are what I call Fake-O scores. There are literally dozens of Fake-O scores. First of all, the biggest Fake-O score is the one promoted by Credit Karma. Credit Karma is deceiving 80 million subscribers to its credit score. It’s insane because 95% of lending decisions are based on FICO scores and specific industry FICO scores. Credit Karma uses a score that 3% to 4% of lenders us. Most of them are marketing scores. Lender decisions aren’t even using the Credit Karma score called Vantage. 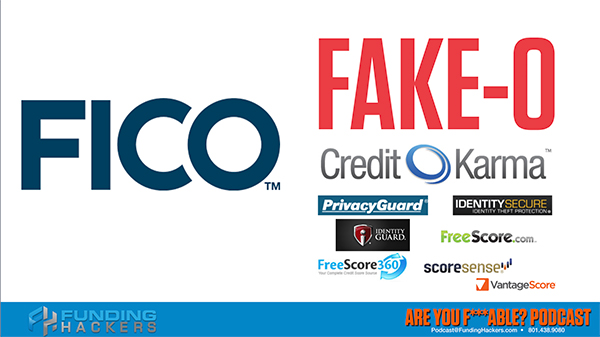 All of these, every one of these in my fact-checking, and we went back to make sure that I only had listed here that I’m only talking about the scores that are fake. By fake, I mean they’re not FICO. Let’s talk a little bit about the source of these credit scores. First of all, fake scores came from profiteering on part of the credit bureaus. I’m not against a profit motive. What I’m against is misinformation. Back in the late ’90s, Congress amended the Fair Credit Reporting Act. Literally 60% of credit reports, credit profiles had material errors that would cause a denial. The consumer advocacies, we at Lexington even, we’re pushing hard on lobbying for a fair amendment to the Fair Credit Reporting Act so that the credit bureaus would be responsible for all the bad juju that they are creating out in the market.

It’s the unfair denials of credit based on bad information. Again, the ’90s were the wild, Wild West of credit, credit reporting, etc. Remember we talked about the funding game where you, your lender and the credit bureau and FICO software is filtered, but if you’ll notice that in this process we created a place that credit bureaus were mandated by Congress to give access to your credit profile, to your data. We call it the raw data file. Now, these consumer disclosure files were designed to be offered free once per year upon request. You had to ask for it. The enclosure, that consumer disclosure file and the raw data was not a credit report. The language and the Fair Credit Reporting Act was very clear. If you were reporting it out there in the world to a lender, you had to give that same data to the consumer because it’s only fair that we know what’s being reported about us.

They gave us access once per year through a place called AnnualCreditReport.com that was the solution that the bureaus presented to Congress saying, “If you request it, you go to AnnualCreditReport.com and you fill out the information and we will give you once a year free all of your raw data.” This did not make the credit bureaus happy. They didn’t want to share the raw data because a credit report isn’t the raw data. When you got a mortgage credit report or an automobile credit report or a credit report that you fill out and you got one of your Fake-O score credit reports, that’s not the raw data. It’s highly curated to present a particular picture. They didn’t want you and I having access to all that data. What do the bureaus do? They’re like, “We’re doing all of this for free because Congress told us to do so.” They want to know how they can make money off of this process.

What they did and this is where the invention of these Fake-O scores came from. Remember the three parties to the funding game are you the borrower, the lender and the credit bureaus running through the FICO software. That’s the lending process. They wanted to bypass that entire FICO process and they literally, Equifax, Experian and TransUnion created a trade association. There are only three members of the trade association. They created a trade association and they said, “What if we were to offer a credit score when they ask for their data file.” They’re like, “Here’s what’s amazing,” to the bureaus what’s amazing, at the click of a button, the raw data could become abbreviated information and they add a fake score. They have to give the information for free, but it’s not the raw data anymore. 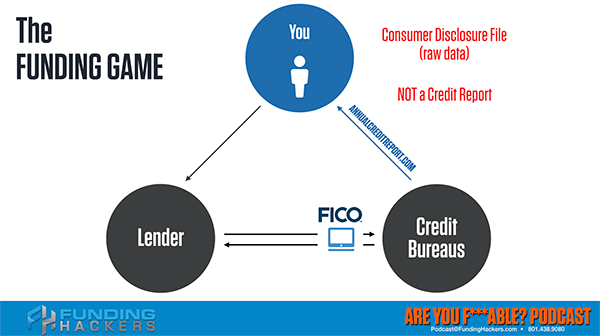 Because you ask for a score, they get to change this profile and shape of your data. They get to give you a fake score. Now, because you and every borrower in the country didn’t know this fact, when we go to get our free consumer disclosure each year, we’re like, “I would love to have a score. I want to see how well I’m doing.” I don’t want to call it fraud because fraud shows intention. There’s a lie and a withhold. We all know a withhold is a lie. They’re now withholding the information. They’re withholding the fact that there is no disclosure, “By the way, when you buy this fake score, no lender uses this score. By the way, we’re not going to give you the raw data. We’re going to give you some of the data. Maybe 50% to 60% of the data in this credit report.”

When you asked for that credit score, it had less information. It was less accurate and it was a fake score. What they began to do is that bad information that less than perfect disclosure and a fake score, and everybody got on his bandwagon literally dozens. I share with you some of them, but Credit Karma, Privacy Guard, Identity Secure, Credit Check Total, FreeScore.com, Free Score 360, Score Sense, Identity Guard, FreeCreditScore.com, all of them started getting on the bandwagon and promoting. Some of you may remember back in the day when there was the Banjo player and he was dressed up in all medieval clothing. He’s talking about getting his credit score. Do you remember that stuff? That was the heyday of deceiving customers. 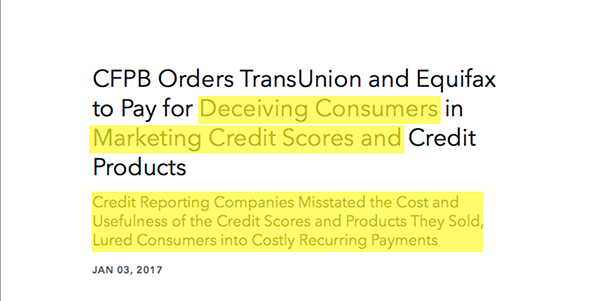 That’s strong language deceiving customers. I like to call them deceiving borrowers, not withholding the truth and not giving them full disclosure. I’m not the only one who believed this. Notice in as late as 2017, the Consumer Financial Protection Bureau ordered TransUnion and Equifax to pay literally fines for deceiving consumers in marketing credit scores and credit products. Why were they being fined? The credit reporting companies misstated the cost and usefulness of the credit scores and the products they sold. They were luring consumers in the costly recurring payments, $19 a month, $29 a month, $39 a month. Costly recurring payments for scores that didn’t even matter. Scores that lenders didn’t use. They got their asses sued for promoting these lenders or these credit scores that didn’t even matter.

The most egregious one, the most common one is exactly what we talked about. Credit Karma uses the Vantage score. It’s not a Credit Karma score. We’re transparent. They use a Fake-O score to give to all of their free subscribers. How many of you are subscribers to Credit Karma and company? Have you gotten a loan through their website or a credit card? Do you realize that when they pulled the inquiry and check your credit and up seek to approve you for that credit card or that loan, they don’t even use the score that they’re promoting on their website? Those are all FICO scores, every one of them. This is insane. FICO scores versus Fake-O scores. You have to know to understand to even get close to knowing what a lender is using. It’s got to say, it’s got to have the FICO logo with the registered trademark. 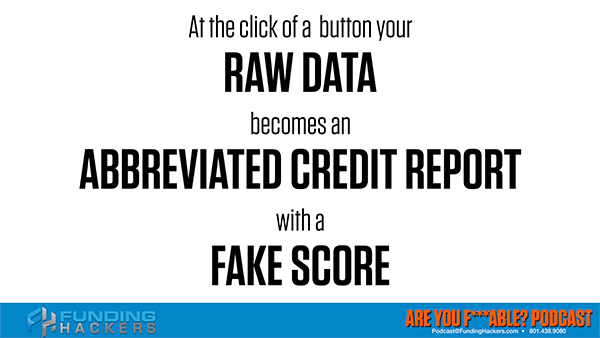 If it doesn’t, you’re being totally duped. You are now being lied to and you’re believing the lie. Like we always do, Get Fundable! means this whole show is devoted to sweeping the decks, cleaning up all mythology and the BS that is being promoted out there and getting down to the brass tacks. You can’t be fundable unless you know exactly how they’re scoring you. Imagine a basketball game where there’s literally ten different scoreboards up there. They’re not labeled and you don’t know which one they’re using to determine who wins the game. That’s exactly what all these Fake-O scores represent. The FICO scores up there measuring, but you don’t know which one to look at. You think all those gores are meaningful, but how many of you have gone into an auto dealership, gone in to get a loan, got in to get a mortgage? Your Credit Karma score or your credit monitoring score says one thing and you get hammered on the interest rate or the loan or whatever it is because the score that the lender pulls is different than the score pulled by Credit Karma.

There’ve been so many people who’ve been discouraged or rejected for a loan that they thought they could qualify for because they were counting on Fake-O score. You may be one of those. Our students and clients, we run into this all the time. They’re like, “Can I come to your boot camp and bring my Credit Karma score?” I’m like, “First of all, that’s why you’re coming to the boot camp is to learn that’s complete bullshit. What you asked me, bless your heart, I understand that you don’t know, but you got to figure out what they’re measuring and what tools they are using to measure your fundability or everything you’re doing is completely worthless.” If you’re a Credit Karma subscriber, sorry not sorry. I’ve met with some investors who are psyched about what we’re doing and how we’re building this fundability model. 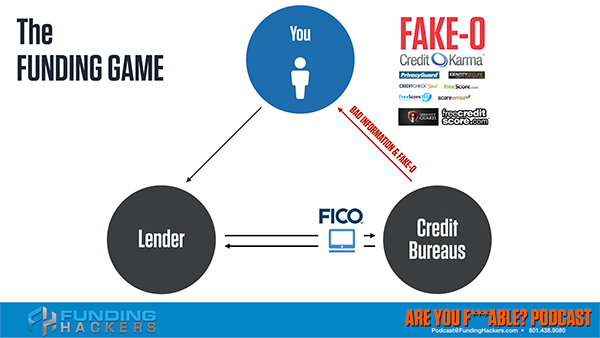 One of the investors is a total fan of Credit Karma. When I finished my ten-minute presentation on the difference between good credit, bad credit or fundable, not fundable, he was angry. I hope you’re angry too. He was angry because he believed that what was being broadcast to him, what his file said on Credit Karma was legit because he believed there’s one credit score. You’re going to find out there is a multiplicity of not credit scores, but different bureau scores and different versions of the software. There is the credit equivalent of a Windows 98 version of FICO software versus a Windows 10. Stick with me because we are here to pull back the curtain and you’ve got to know the truth of what’s happening out there or otherwise, you might as well not even play this game. Are You F*able to be F*able? You have to know what measuring and you got to know what scoreboard to look at. We are here to take down all the myths and all the BS, so you know exactly what time it is when it comes to how to become fundable. I will see you next time.

Are You In Alignment With Your Vision? With Mark Dolfini

If You Have A Good Lender, They’re Doing This…