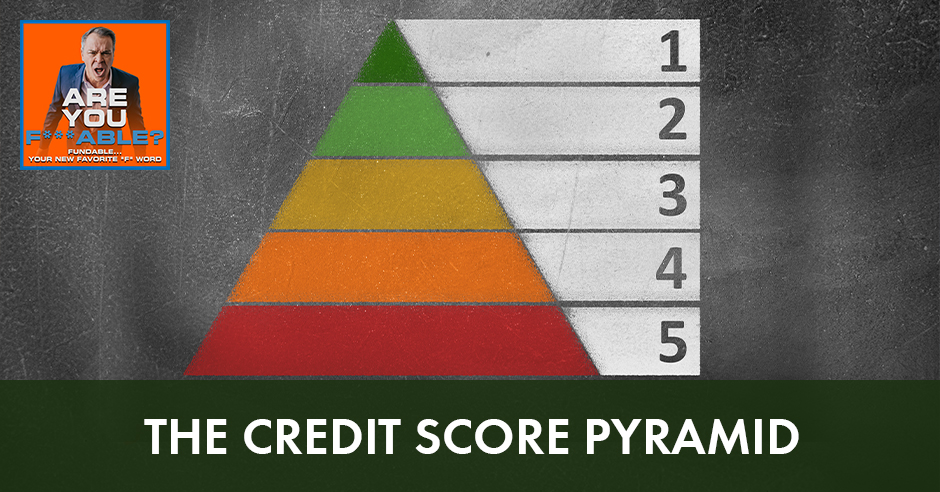 A lot of people don’t have any clue how lenders are making more money out of them. The credit score pyramid, invented by Merrill Chandler himself, shows how lenders are making more money off of you without leaving you any clue whatsoever. These lenders are smart, but you can outsmart them if you know your way around the credit score system. Merrill talks about the credit score pyramid, explaining its ranges while sprinkling some facts about credit tiers and grading on a curve. Learn more about the pyramid as he breaks it down layer by layer.

We’re going to take a look at what I call the credit score pyramid. This is an invention of mine that encapsulates exactly how lenders are playing you and making money off of you and you have no clue. They’re using some of those scores I talked about previously. They’re using some of those scores to leverage how much money they make every single time. Let’s get into it now. First and foremost, let’s take a look at the pyramid itself. The top of the pyramid, the height to the bottom is score. That’s the score range. In this case, we’re going to use the unweighted scores. You even know what I’m talking about now. We’re using unweighted score ranges. Eight hundred fifty is the highest, 300 is the lowest.

The more time you spend building the right profile on the personal fundability side, the more money your business is going to make. Click To Tweet

This credit score pyramid is applied to every bureau and every type of score and version. It could go from 250 on the low to 900 on the high if we’re using quiz time, if we’re using FICO weighted auto scores and bank card scores. Eight hundred fifty to 300 low is what we’re using here. That’s the FICO credit score range for unweighted scores. The base of the pyramid is what we’re looking at when it comes to the range between your highest and lowest scores. Highest and lowest scores are the range at the bottom. The base of the pyramid is represented by the difference between your high score and your low score. We took a look at some of those scores and different versions, etc. This is calculating across all three bureaus. Different ranges and different versions are the upper, lower and then the range between your highest and lowest score is the base.

Let’s take a look at tiers. Credit tiers are groupings of scores. They usually go anywhere between twenty, sometimes as high as 40 points in different tiers and autos have different tiers, bank card scores have different tiers and even mortgages have different tiers. These tiers are vital. Remember how we were saying when Brad went to buy an automobile with his daughter, he said, “All my scores were within a few points of each other and they all fit in a particular tier.” It doesn’t matter if you have one, two or three scores within a tier because the tier is what dictates the terms and your interest rate, etc. It doesn’t matter that if you’re 720 to 739, in this example, you’re going to get the relative same financing terms and interest rate. 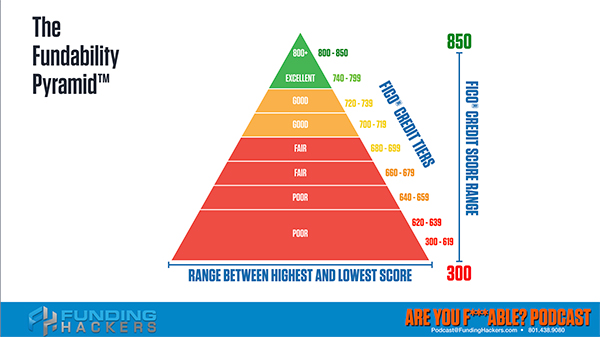 The next thing we want to look at is that in these credit score tiers, the height and the range. What I’m looking at is the 850 all the way down to 300, the credit tiers. There’s usually seven to nine tiers and the range between your highest and lowest score. Here’s what’s fascinating. An auto tier one is a 720. Mortgage tier one is a 740 or higher. These are tier floors. By floor, I mean an auto tier one is 720 or higher. You’ve got to have a minimum or floor of 720. A mortgage tier one is 740, the floor has to be at least a 740. To get 740 tier one rate, your middle score for mortgages has to be the 740. A business line of credit tiers or bank card tiers, tier one is 760. Can you get qualified for less than this? Of course you can, but these floors are indicating the favorable interest rates. There are even better rates.

If you have an auto tier one, you’re a real 820 and a fundable 820. You will have better rates and terms than a 720. This is the floor. This is what the industry considers as the bare minimum for the best financing or extremely favorable financing. What we want to look at here is that across the bottom, the base of your pyramid, if there is a twenty-point or greater range between your highest score and your lowest score and that high and low score is by version. You’re not comparing nine to eight. If you’re using a FICO 8, an auto, if there’s a twenty-plus range on FICO 8, you’re going to get manual underwriting. 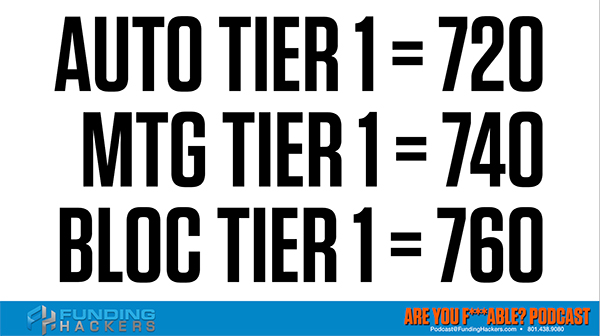 Anything above twenty-point difference, what we have inferred from all of our data and all of our student and client experience. This is not an algorithm that says this. Our experience has been that all these ranges cause individuals, cause borrowers to get put into manual underwriting. If there’s twenty or more point differential, that means that the lenders can’t trust the data. Is it 740 or is it 720? What’s the real score? That’s why mortgages take the middle score because they’re playing it safe. Many auto dealers will pull one or two, sometimes three scores only if they doubt the integrity of the data. What we want to look at here is twenty-plus no bueno, but zero to ten points is bueno. It’s awesome.

That’s the range that we talked about with Brad when he said, “If you can pull an Experian, I’m safe. I’m all in the same tier. You can cross over tiers and there are certain times where you’re a tier one, tier two or tier three, but you may cross over, then you want to choose the score, the version of the software and the bureau that represents the highest possible score.” In this case, Brad is, “We’re all within the same tier.” He could tell that auto dealer, “Go ahead and pull any one of those Experian. If you can approve me with Experian, then you got my business.” Here, zero to ten-point range is very trustworthy, especially if it stays within the tier because tiers dictate and rates confirm. 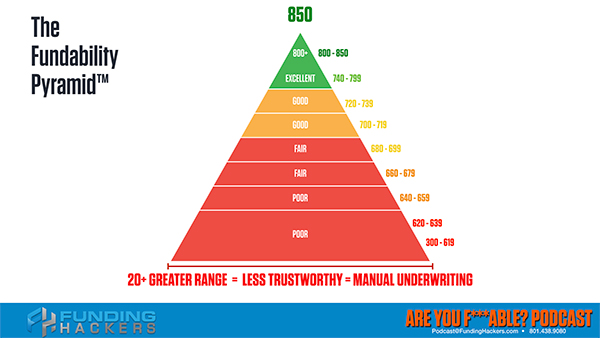 We stay in automatic underwriting anytime that we are in that zero to ten points range between the highest and lowest score. I’m telling you all this stuff and you’re like, “What does knowing this stuff help me? What does it even matter?” Like I told you, getting played by the auto dealers or the big-ticket merchants, you’re getting played here too. There’s a certain, I don’t want to call it prejudice, FICO and the lenders are feeding us a line that’s misleading or that’s not completely true. I’m not calling them out as liars, cheaters and thieves because it’s not so blatant, but the perfect way to say it, they are grading on a curve.

Let’s take a look at what I mean by grading on a curve. Let’s go back. The average national credit score from FICO is right between 700 and 710, right down the middle. It’s the national average. Did you realize though that lenders maximize their profit? Did you know that lenders maximize their profit at exactly the same score range, 700 to 710? Does that feel a little suspicious to you? You would think that they would be making more money in higher interest levels, but this is what I mean by grading on a curve. FICO predicts. Do you remember predictive analytics? FICO predicts that at a score of 700 to 710, not 720, not 760, not 810. FICO predicts that between 700 and 710 that a lender will get 95% of their principal repaid plus interest.

The average national credit score from FICO is between 700 and 710. Lenders maximize their profit at exactly the same score range. Click To Tweet

Because it is a lower tier, this is like tier three to tier four, depending on whether it’s bank cards or auto loans or mortgages, they get to charge 30% to 50% higher fees and interest on that score, 700 to 710. FICO predicts and lenders are most profitable in the score range of 700 to 710, even though it’s tier three maybe even tier four. Because they get 95% of their principal repaid plus interest, but the interest is 30% to 50% higher in fees and interest rates. Think about it. That’s what I mean by grading on a curve is that you would think that if you’re going to get 95% of your principal back that the interest rate would be a little bit higher, but not hugely higher.

They know that they’re going to get 95% of their money back because remember, they’re the ones who set up the scale. They’re the ones who set up the grading process and the tiers. Automatically, we take it for granted. “Merrill, you’re tier three. I’m going to charge you a 6.5% interest instead of 4.5%.” “Why?” “FICO predicts I get 95% of my money back,” says the lender, plus interest. Interest is much higher because of this low tier. Do you see how we’re grading on a curve then and they’re stretching the realm of fundability to make a grip of money off of those who have average credit. The average credit rating across the country is 700 to 710. That’s weird. That’s why I said that lenders are most profitable if your score is at the 700 to 710 because they get most of their money back and they get to charge way more interest. 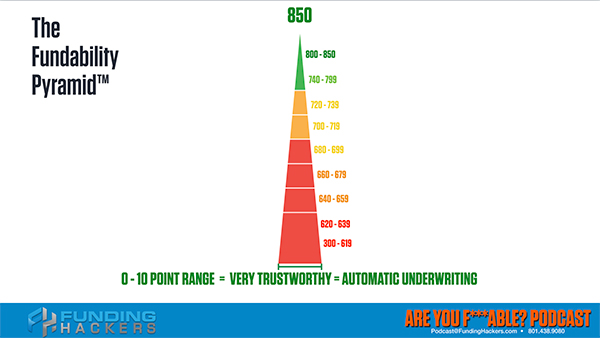 Let’s throw in a new concept. Remember one of those scores that we talked about? One of the scores that FICO uses is called the revenue score. This revenue score predicts. Given a particular score and a particular ZIP code, FICO predicts how much money they will make off of that lender. I’m just choosing $500. I may be high or I may be low. Based on your ZIP code and your credit score, they can predict to a fairly predictable profit margin of how much revenue a lender is going to make off of you. Let’s talk about it this way. How does that help us? 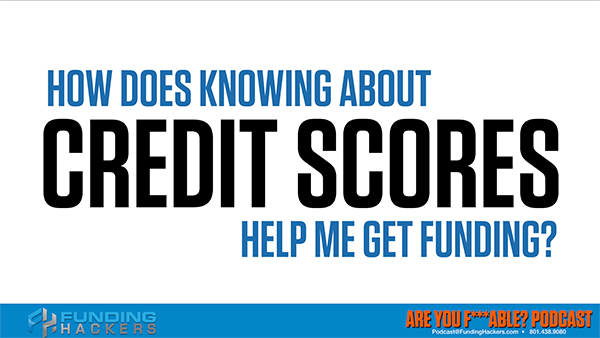 That’s how they can predict the growth of the business and taking care of their shareholders, etc. Even if you’re at 700 to 710 and you’re making $500, they want to know what do I have to do to make that same $500 from somebody who has a tier-one 760-plus? What do I need to do to make the same $500? They’re going to give two to three times the credit limit or loan amount so that they can make the same amount of money. It’s the same application. It’s just they have to give us more credit lines in order to make that same amount of money. 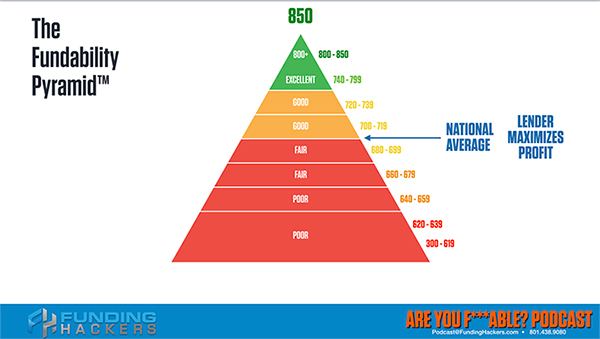 It’s the same application, same data, same everything. Because you know the rules of the game, you will be able to understand why you’re getting lower amounts or higher amounts. That awareness of the credit score pyramid is vital because we want to stay in automatic underwriting. We need the difference, the range between our highest and lowest scores. Whichever version of the software we’re using, we need the range to be ten points or under. We definitely needed to be under twenty points so that we can stay in automatic underwriting because this is all automatic underwriting. It’s calculated by this automatic underwriting software. That’s the only place that you’re going to find that information. That’s awesome stuff. This is crazy awesome. Are you bingeing number two or three or five or fifteen? I’m telling you, if you haven’t seen the visuals, make sure that you go to GetFundable.com. I’d love to see you on the next episode.

Using The Slingshot Strategy For A Better 2021

The Secret To A Successful Banking Relationship

How To Freeze And Unfreeze Your Accounts